You need an iPhone!

The iPhone: the undeniable representation of the average under-30 American. Ever since some guy in a black turtleneck unveiled a block-like device with touch capabilities back in January 2007, the business, technology, and communication industries have never been the same. The iPhone was a revolutionary contraption that fused together the internet, a music player, a phone, and many other technologies into one pocket-sized device.

Today, the iPhone continues to be revolutionary. In each iteration, monumental and generation-changing features are modified and added. The display has gotten progressively bigger (growing a whopping .5 inches over 5 generations), more pixels have been added (for those of us who count each individual pixel on our iPhones), and most recently, a never-before-seen (not counting multiple Windows laptops and various other devices) fingerprint scanner was added to the home button. For those of you who are more visual, below is a comparison of the progression of the original iPhone to iPhone 5 and the first Android (HTC Dream) to the latest (Google Nexus 5). 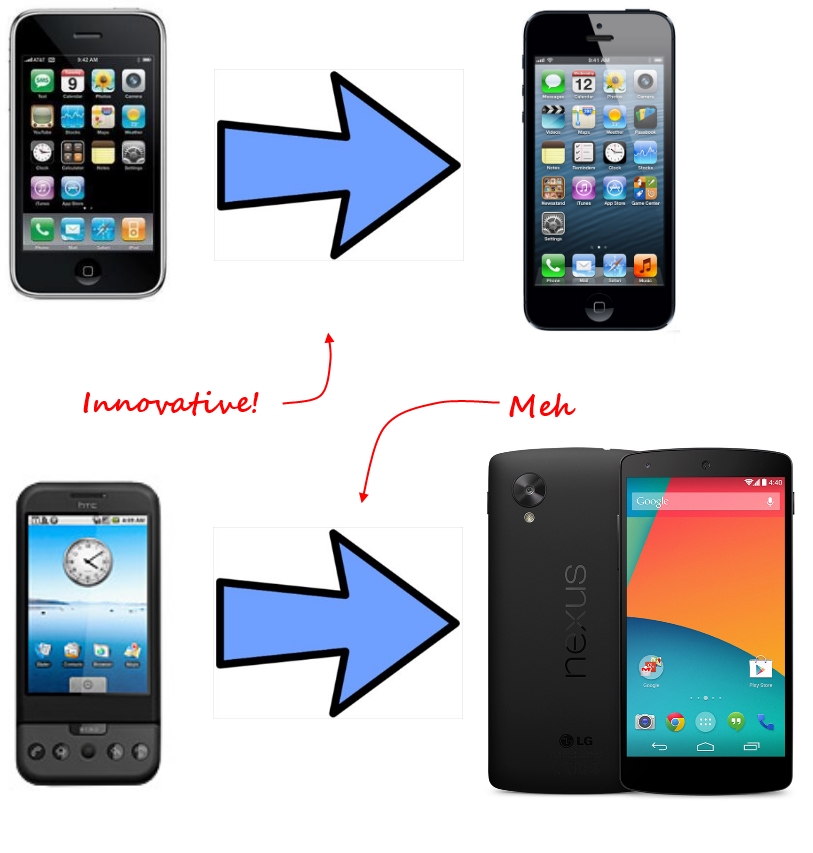 Speaking of visual, iPhone users must have been devastated after the new iOS 7 was released sans the skeuomorphic (a better-sounding way to say similar) design features of the previous 6 iOS versions. No more lined paper in the notes app or fake bookshelf in the books app? I don’t know how I’ll function! The new flat design in iOS 7 seems to conform to the rest of the smartphone world, which seems contrary to Apple’s blazing-new-paths approach to technology.

Most people believe that iOS 7 is a step back for Apple. However, I am of the opinion that iOS 7 continues the incredible evolution of the iPhone through a less-is-more approach by simply making the interface more brightly colored to increase the attention span of its users. This is a brilliant move, since most people simply go directly from the home screen into various apps as quickly as possible without admiring the beauty of 20 diverse icons. The new shiny color scheme of iOS 7 keeps people focused on the homescreen for at least another .6 seconds (as proven by an Onion scientific study). This is important because the iPhone home screen offers so much more than just app launching: a user can whimsically scroll back and forth between screens while admiring the “bounce” effect once the last screen is reached rather than doing anything productive. Here is an example of the amazing power Apple products have on people:

Note: Several brilliant Youtube commenters have claimed that this video is “fake.” They are not to be believed.

The most critical reason for getting an iPhone is the simplicity in decision-making during the buying process that it offers. The iPhone completely eliminates any choices or decisions the consumer needs to make, thus reducing the thinking required and allowing the consumer to more quickly jump into a game of (Insert Adjective Here) Birds. On the contrary, users who decide to purchase an Android phone are forced to choose between a multitude of different phones, each offering different options and specifications.

Although the variety might allow them to select a phone that suits their needs better than the one-size-fits-all iPhone, it forces the user to complete necessary research and consider their options. Who would actually want to research different phone options when they can have the stylish and expensive iPhone just like everyone else? Who doesn’t want to conform to the masses by having the same mobile device as every other millennial in close proximity?

And who even says the iPhone doesn’t promote individuality or choice? It comes in 2 (two, dos, deux, zwei) colors (even more if you choose the iPhone 5c!) and that doesn’t even include the case! Android is much too complicated for the average user. Having to compare multiple phones (not to mention having to customize home screens, settings, etc.) that meet specific needs is far too complex for consumers. I would much rather throw down a few more dollars (alright, maybe 300 more) to trim my options so that everything is nice and simple. It is clear that choosing iPhone is the right decision, as evidence by the large mobs of lemmings awestruck individuals gathered outside technology’s Mecca the Apple Store preceding every iPhone release. The iPhone has been scientifically proven to create extreme amounts of happiness in anyone who purchases one (see the guy on the left below whose celebration is due solely to his purchase of a new iPhone).

Maybe you’ll eventually get tired of the lack of customization ability in iOS and want to “break out of the walled garden” (don’t worry, it only happens to an infinitesimal percentage of iPhone users). You can jailbreak your iPhone, and with a little bit of risk and a voided warranty, you will have access to revolutionary new features such as widgets on the homescreen, the ability to create custom gestures and shortcuts, and the ability to set third-party apps as default (all of these are available on Android out of the box, but who would want to spend the time choosing an Android phone and customizing it?). With a jailbreak, you can even install non-App store apps, set any song as a ringtone, and manage your files. How innovative!

If you want to eliminate the creativity, customization, and community improvement aspects of smartphones, go with iPhone. Be like everyone else and shell out those extra Benjamins in order to sign away your freedom to Apple corporation and conform to whatever they deem necessary in a smartphone.

What do you think? Cancel reply